As I move from this apartment, thoughtful about the decorating decisions that I want to make in the next place, I started looking back at the photos of the apartments I’ve lived in since leaving CDLV. Because CDLV was so dark, so moody, I took very little from that house with me. In fact, all I took was my blue and white porcelains, a couple of pieces of art, my design books, and my white sofa from the sunroom. It looked like this at CDLV: 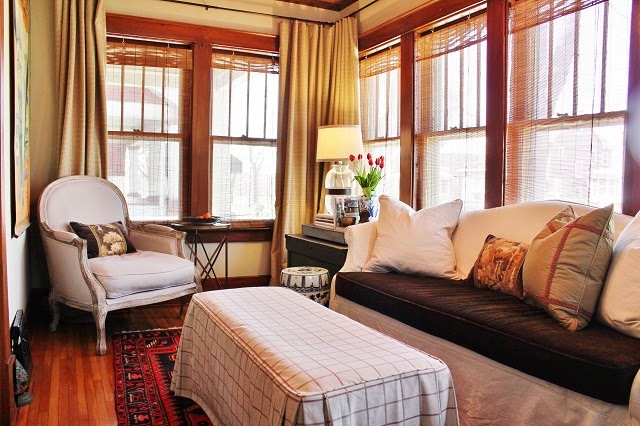 It was a great sofa, I say was, because I no longer own it. A sale that I highly regret – which brings me to my first regret: ditching the white sofa. I honestly believe that you’ll never regret having a sofa with a tailored white slipcover. Never. I should have kept mine, I regret selling it everyday. Anyhoo! I moved into my first space back in January of 2014. I was in love with the white walls and hardwood floors – finally a space that wasn’t so gloomy. 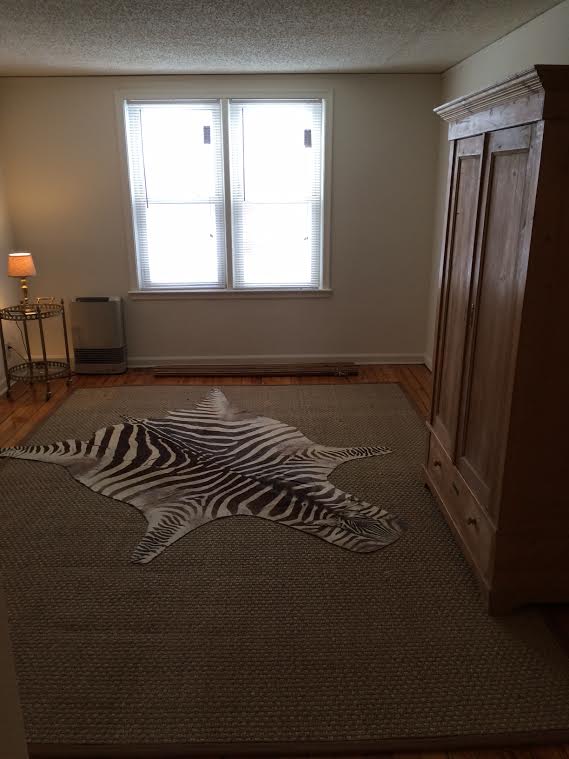 The first thing to go in was the Swedish pine armoire, seagrass rugs, and zebra hide. Then, slowly, the other pieces started to fall in place. 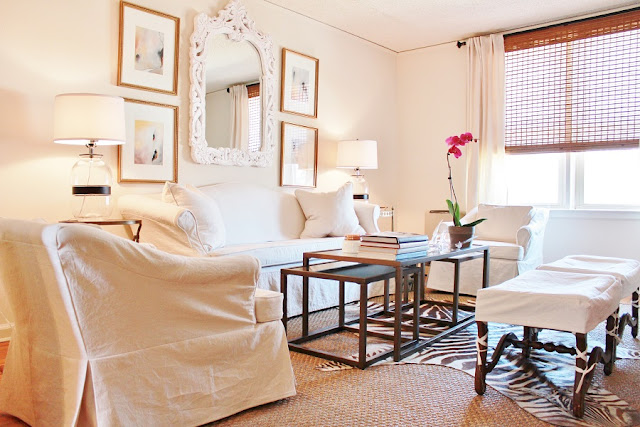 I bought two vintage club chairs at a thrift shop, and had them slipcovered in the same white as the sofa, along with nesting mirrored coffee tables, ottomans, a mirror, and had art by my friend, Dianne Ballard framed. 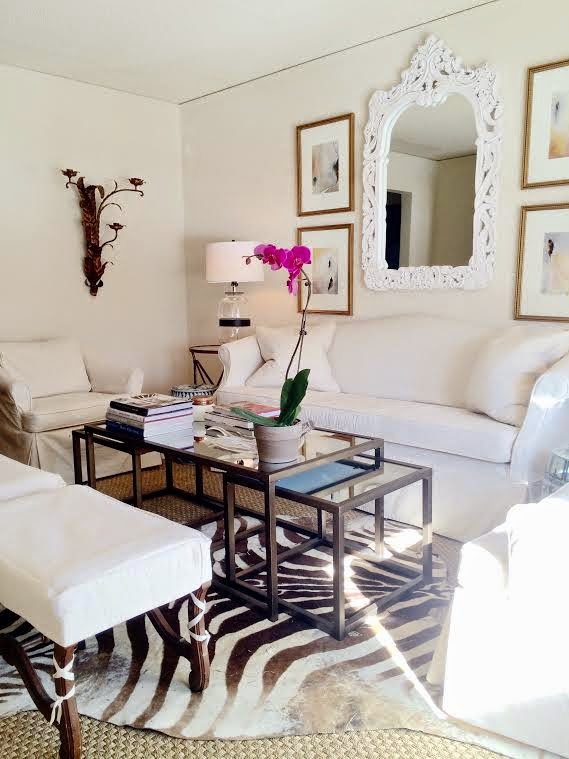 The room was filled with light, and people loved it! I entertained often, the space just worked. Other spaces from that apartment that you’ve likely not seen: 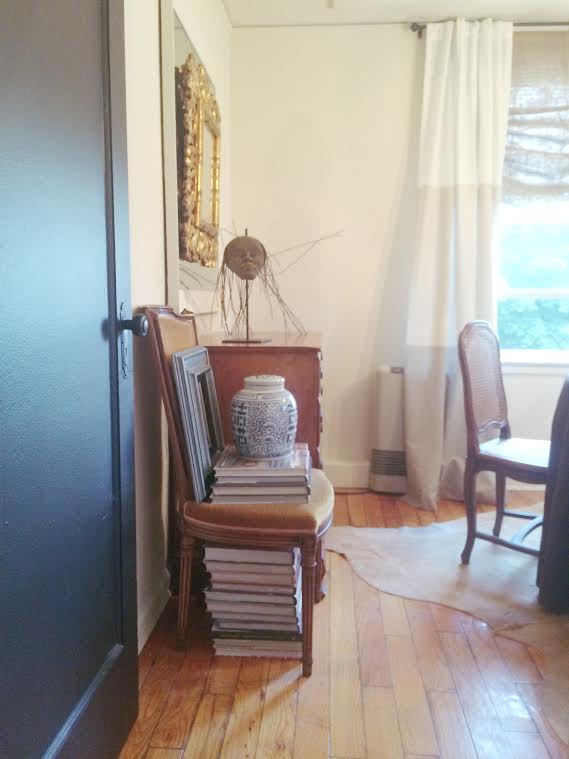 The dining room/library. All of the doors in this apartment were painted black. I love that look, and on these wood doors, it was just beautiful. 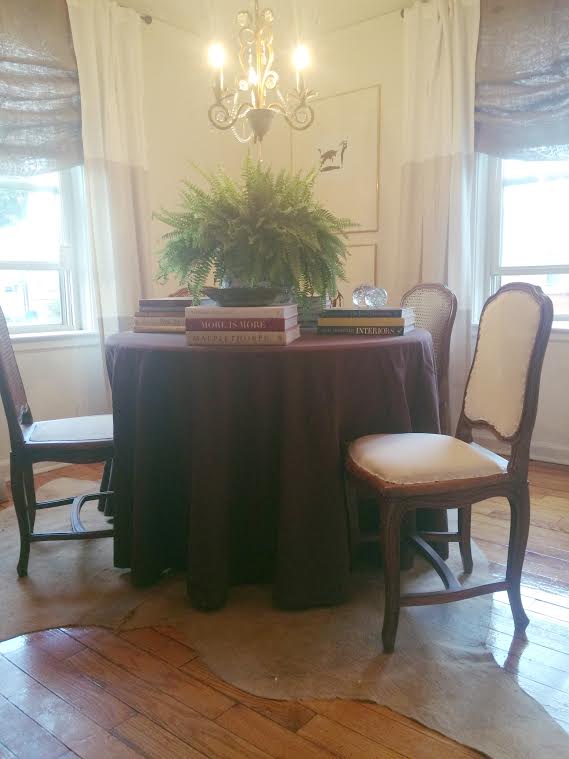 A cowhide rug I’ve since sold on Craigslist, chairs I threw away! Yes – these went in the trash! I know, I know! A chandelier I left on the curb in Rochester (long story), and curtains that were ruined by Louna (the second French bulldog – yes, there are now two of them!). 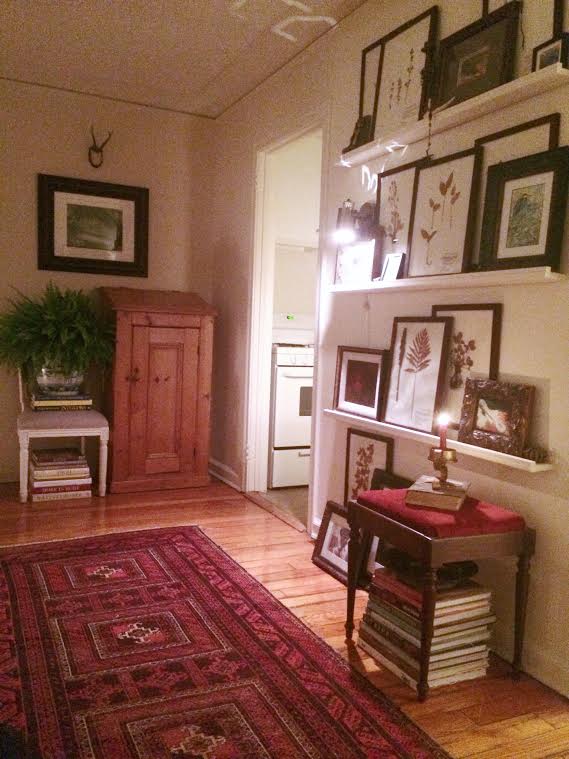 The main hallway with a gallery wall of botanicals, art, and brass bells on floating shelves I made. The sewing bench and French chair next to the lecturn are also gone, victims of my impulses and someone else’s Craigslist score! 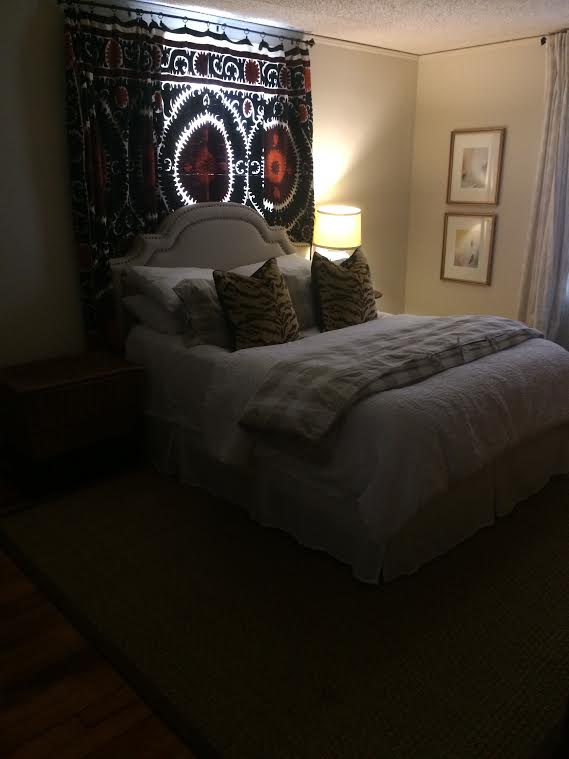 The bedroom – always sort of an afterthought I guess, with the antique Suzani blocking a window. I never did block out the window fully. This wasn’t the original layout of that room. It had originally started with the bed on the opposite side, and when I moved the armoire into this room to accommodate chairs it got shifted. I actually wish that I had better pictures of this room, since it was, at one point, very pretty. 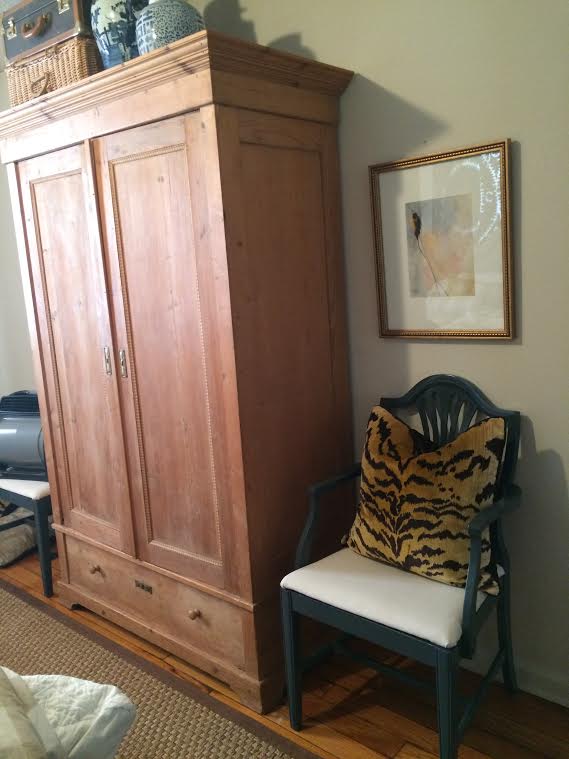 The opposite side of the room. Those chairs were a little DIY project I never truly loved. You’re gonna see lots of “unstyled” photos in this post – so just overlook the mess and real-life stuff, like the fan sitting in the opposite chair, and Arlo’s dog bed. Speaking of Arlo, that’s why we had to move from this apartment, the community doesn’t allow dogs. So, I went in search of something else. 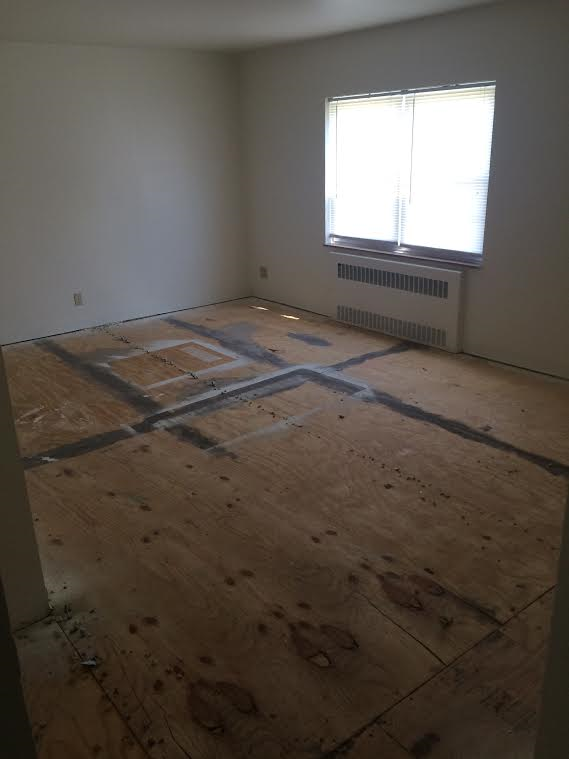 We ended up with something VERY different. Now, for those of you who rent, you know that rents have gone up in nearly every market in the country. It’s difficult to find nice places that are affordable. And before someone chimes in with the argument to buy, I get it, but it ain’t happening! Not here, anyway. This apartment was much less charming. Wall-to-wall acrylic carpet was in every room, and I sweet talked the manager into letting me put down my own floor at my cost. 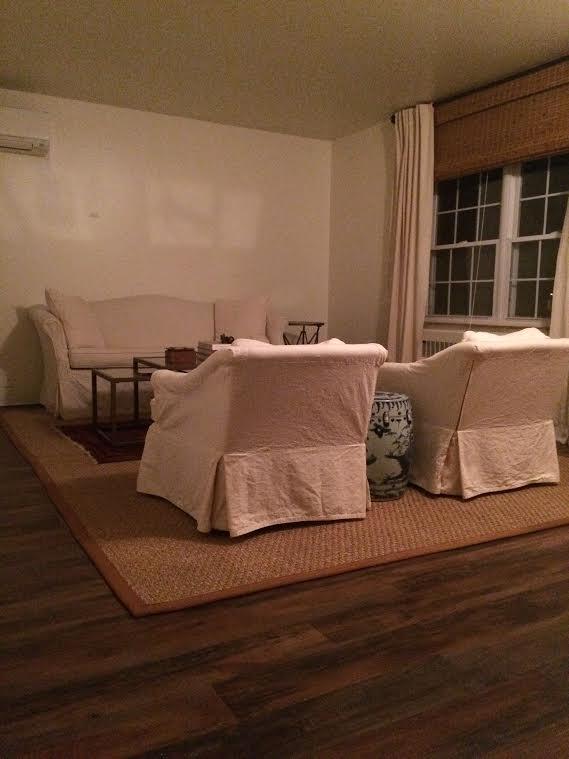 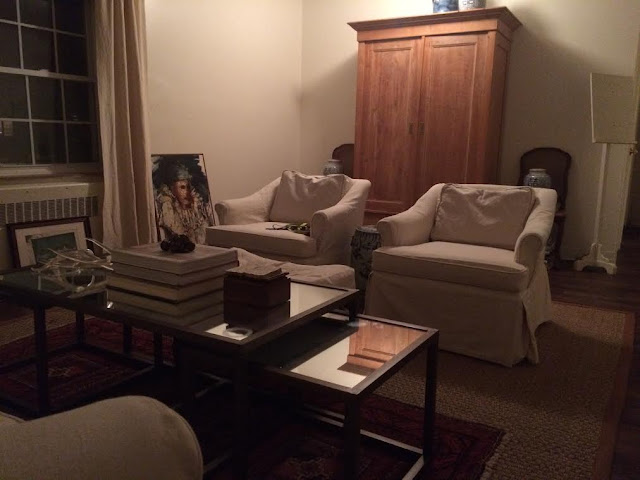 So I put the floor down, and I brought over the furniture, but it just didn’t seem right. I know now that the armoire should have been placed on the wall where I put the sofa. I then could have flanked the armoire with the chairs, and had the sofa float in the room. It would have saved me thousands of dollars, and a lot of headache. But, you live, and you learn. I sold the chairs, and bought 4 bergere chairs that I had slipcovered. I made a giant ottoman and you know how that all turned out: 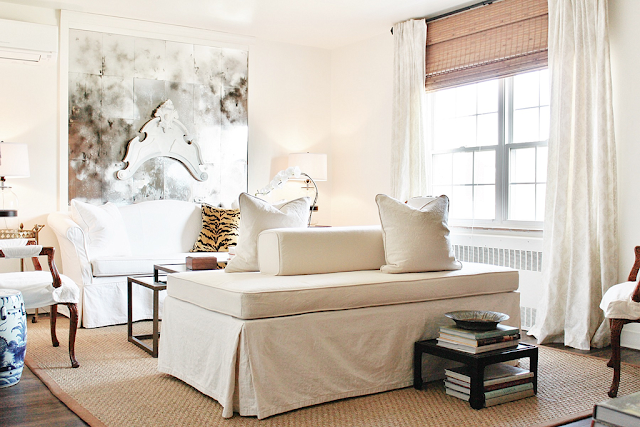 It was very pretty. Highly impractical though. I never entertained in this space. The chairs weren’t comfortable, no one could find a good position to sit comfortably on the ottoman, and you can’t very well stack 8 people on a sofa. I had turned the room into something that was pretty for photos, and that was about it. 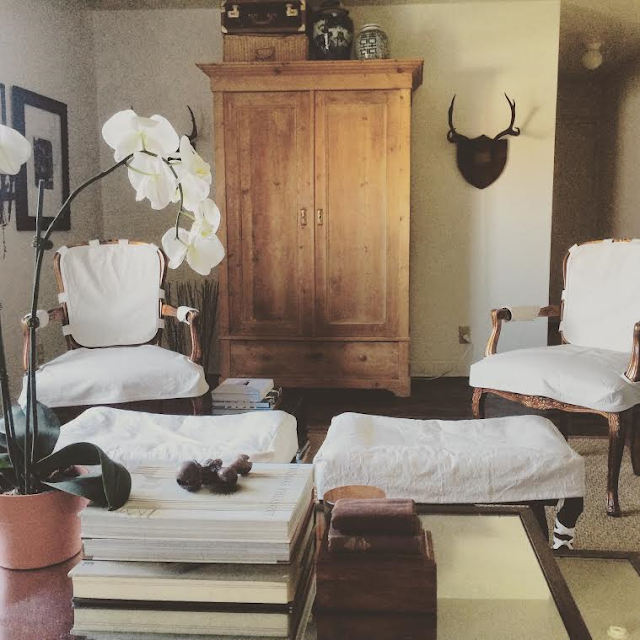 So, I sold the giant ottoman. Then I sold the armoire, and the chairs! I had been inspired and bought a vintage bamboo set to replace the chairs, but then sold that too when I realized that once again, I bought “pretty” chairs instead of comfortable chairs. 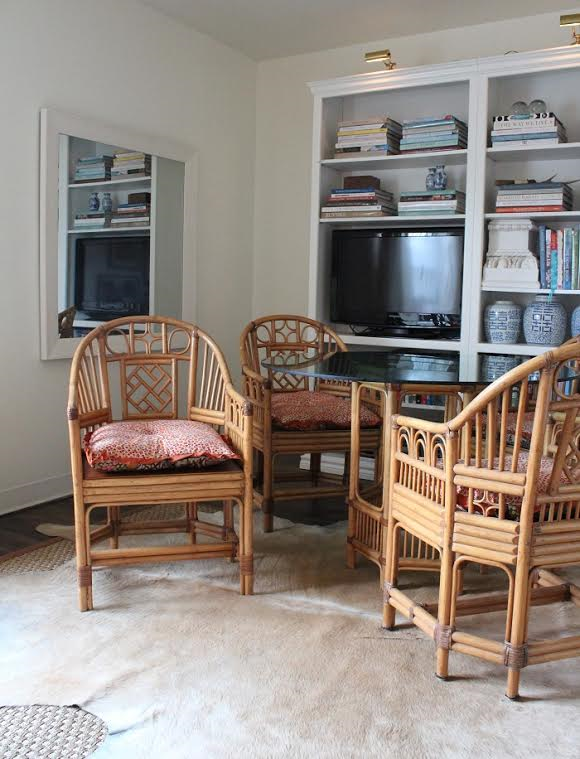 The bookshelves were moved from the second bedroom, which I had initially set up to be a little reading room: 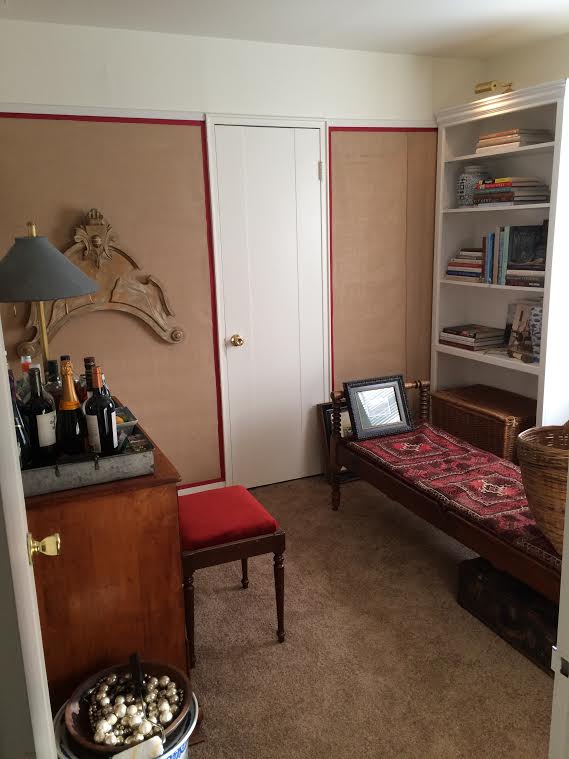 I wrapped the walls in burlap and trimmed them in red twill tape. It was a pretty space, but I never spent any time in there apart from grabbing clothes from the closet or the dresser. Eventually, I sold my sofa (again, my biggest regret) and bought an antique daybed thinking that would be a beautiful look in there. 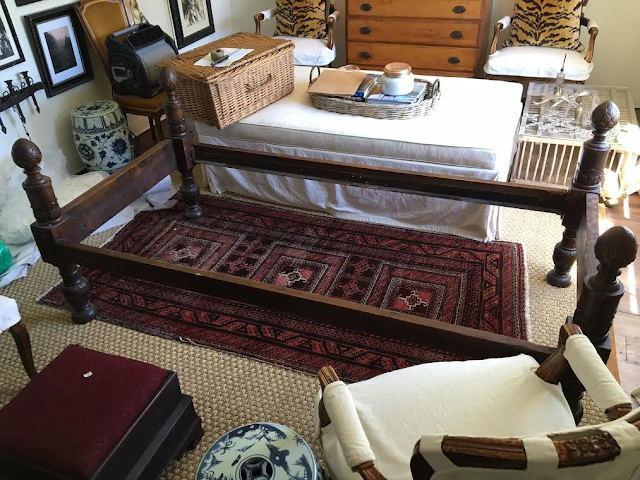 I told you these weren’t gonna be pretty. Now, I know you’re wondering, didn’t he say he sold those chairs. Yes! I did. I actually sold the chairs and the ottoman to a friend who owns a design shop here, and she asked me to hold them for her. A month or so later she came to pick them up, and by that time, I realized that the daybed was a bad idea. 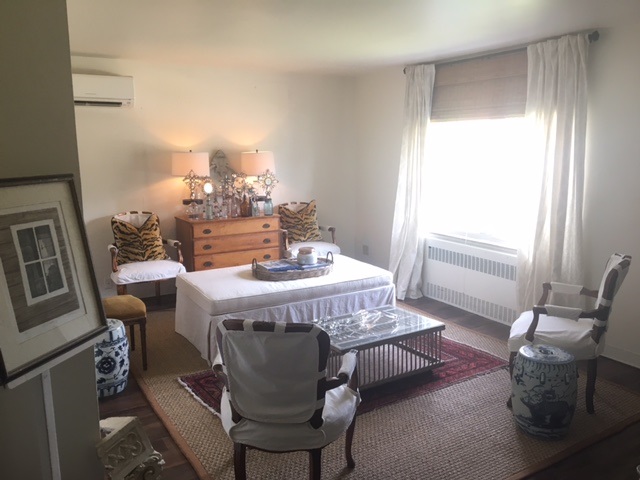 Once the daybed, and the chairs and ottoman were gone, I went into a panic. That’s when I ended up with the Pottery Barn sofa. 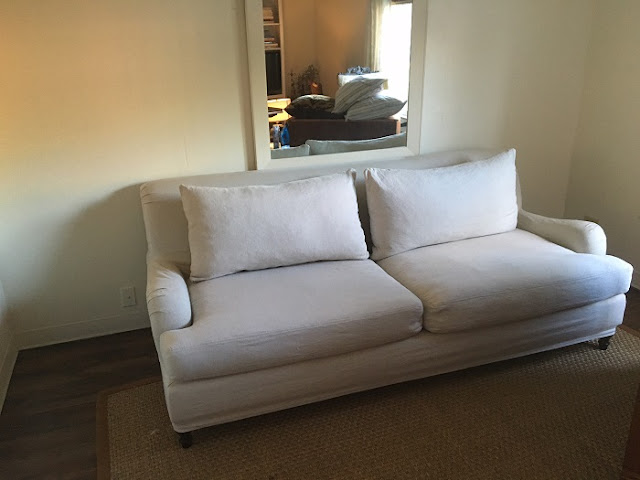 I took the mirrored wall I made for behind the white sofa down, and I moved this mirror there instead. Oh, and yes, the antiqued mirror wall went in the trash, and this mirror was since sold. (If you had any questions about just how crazy I am … this post is certainly going to clear that up! HA!) I struggled with chairs. I knew that I needed something comfortable. I was still loving bamboo so I ended up picking up these vintage Ficks Reed chairs at an antique shop: 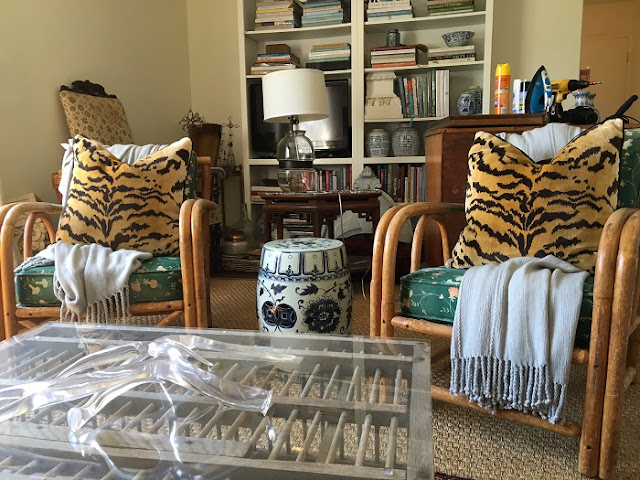 Hows that for a design blog photo? All of that stuff ended up not working for me. Thankfully, I’ve always been able to sell things, so up they went, and off they would go to their new homes. While I wasn’t in love with the new design, it finally DID have some sort of finished feeling just before I decided to move. 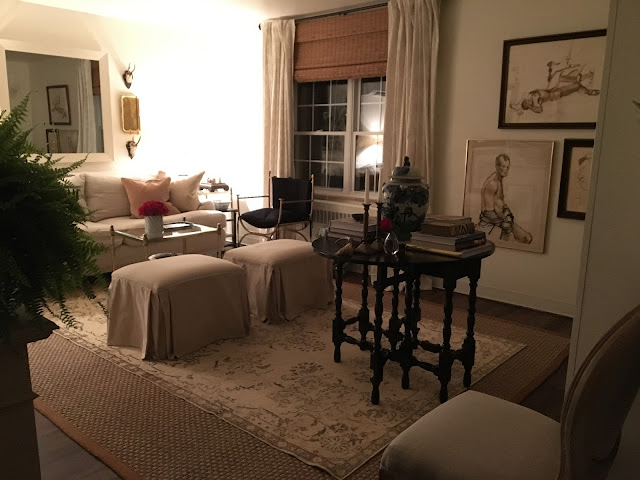 There were a few things that I loved about the space, firstly the art. I’ve always loved art, and I’ve collected some great pieces. I love my gallery walls, on both sides of the living room. I also love my new Savonarola chairs, the sunwashed Anatolian rug, and my French brass and glass table. The rest of it is sorta ‘meh. (Shrug).

The new space is larger, and I knew that the current seagrass wouldn’t fit. I sold it, and with it gone, the room felt really strange. On top of that, I finally bought a piece that I’ve been dying to have for well, forever. So I had to shift things around a little bit, even though I’m in the middle of moving! 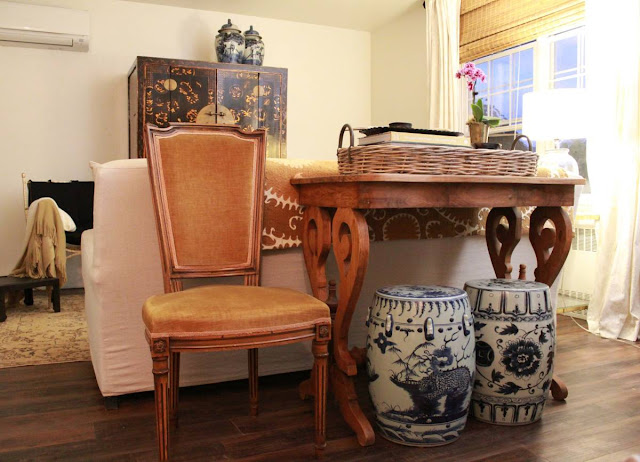 Yep! There she be folks! I know you can see what I’m talking about peeking out behind the sofa and that French chair. I’m talking about the Chinoiserie Wedding Cabinet! Oh – I can’t, I just can’t. I don’t even have words for how much I am in love with it. By far, my best purchase to date.

Ok, but back to the point. The new apartment is larger, so I knew my current seagrass wouldn’t fit. I also had to have a second matching seagrass to go into the dining room that adjoins the living room. So I ordered new ones. That’s when I started thinking about what to do with that floor! The new living room is 12×17; a small dining room adjoins it. The dining room is 8×13, and together they form a perfect T-shape. To avoid the price for custom rugs, I went with standard sizes, 10×14 in the living room, and 6×9 in the bedroom. If you’re looking for rugs, check here:

With them down, there isn’t much floor space around them. I’ve been struggling with whether to do white floors or to stick with the product I put down in the current apartment. I was 70% toward white until last night, when I realized that I was making decisions based purely on looks again, and not on function. With my dogs, will a white floor really stand up? How often am I going to be ashamed of having people over because the floors need to be retouched?  I’m now 70% leaning toward the floors I have now, which look good all the time and have worn like iron. I also am walking right into that living room (no foyer) with snow boots in the winter. Is it all that practical?

I grabbed the keys to the new place yesterday. Are you ready to see what it looks like? I am telling you now, don’t rush to judge, but I definitely have a project on my hands! Here’s that living room: 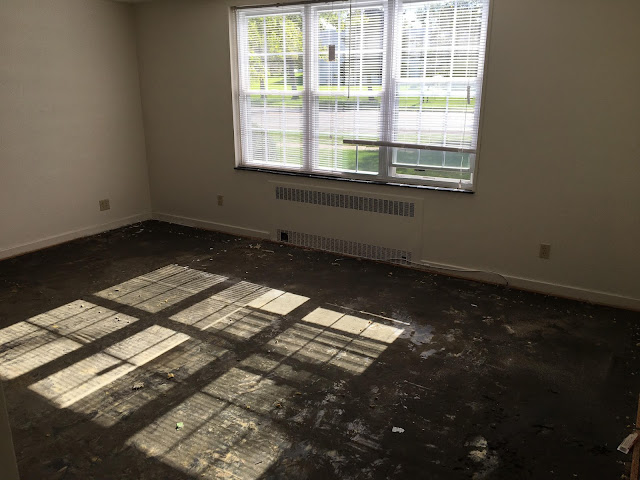 It’s definitely not an easy space to photograph, although, I didn’t really pay much special attention to getting the angles right for interior design photography. The dining room space is directly off of this space, to the left: 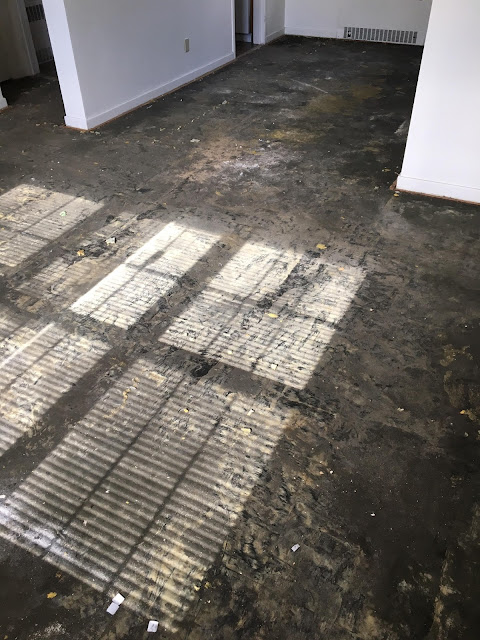 The current floor is filthy! This is typically not how someone would accept a unit, but because I asked them not to put carpet in these rooms, this is how I got them. It’s amazing what years of dirt and dust from carpet schmutz can end up looking like, isn’t it? 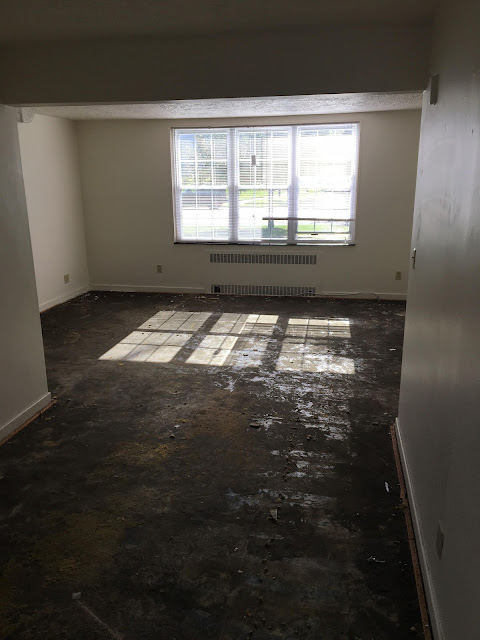 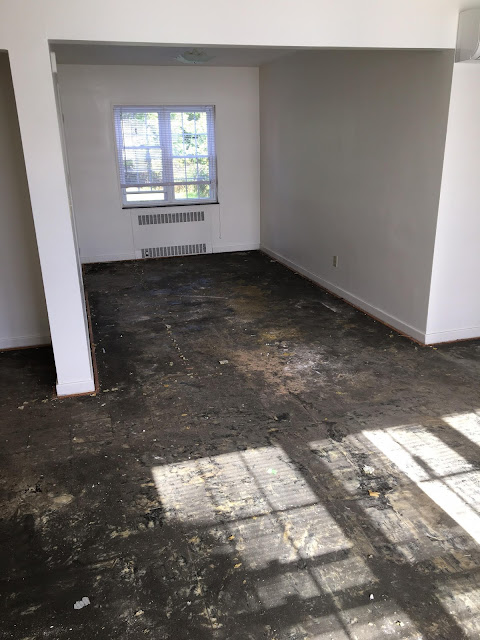 What are my plans for the rest of the space? Well, you’ll have to wait and see. And I’m not being cute because I know I don’t want to share. I honestly don’t have it all figured out yet because there are so many variables! Keep checking back for updates. I should have some good pics for you on Monday! Happy weekend all!