*I took a few pics at lunch today, so I updated this post!*

I can’t even begin to tell you how much of a struggle this move has been, primarily because of the delay caused by the floors. You see, the floors were only supposed to take a weekend to do, fast forward 14-days, and I’m still not done! All of the time that I spent putting down floors after work and between rehearsals (oh, I’m in another play, did I mention that?) was time I had hoped to use to pack up the other apartment. Once you factor in the time lost, the weather (it rained ALL WEEKEND LONG) and the fact that I got some sort of a head-cold during the clean up of the new place, it’s a wonder that I’m even still standing.

I was so excited to see your comments, and read your emails about checking back often for progress. I thought I’d show you a little bit of the new space even though it’s certainly not finished. Once we get there, I’ll take the time to charge my camera and take some really great pics for you! But here we go: 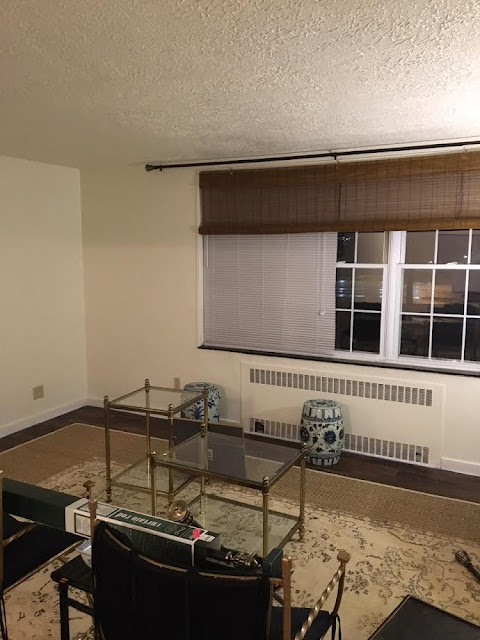 The complex requires that the mini-blinds that they provide stay in the windows. However, they do allow you to hang whatever you’d like inside of your apartment so long as they are not visible from the street. So, I hung these matchstick roll up shades right over the blinds. I typically would go for bamboo roman shades (like I did in the last apartment) but this window is 102″ long, and to get that span in a bamboo roman, I would have had to use 2 separate shades. This way I have one continuous line across the entire window, which I like. You’ll also see that I took that curtain rod WAY out, about 16″ from the edge of the window just to widen the visual a little more than it already was.

My French brass tables are unfortunately not going to work in this space. They didn’t quite work as I had intended them to anyhow, they’re just too small, and the proportion is wrong for the space. So, I’m on the hunt for a new coffee table. Separate post about that coming soon. 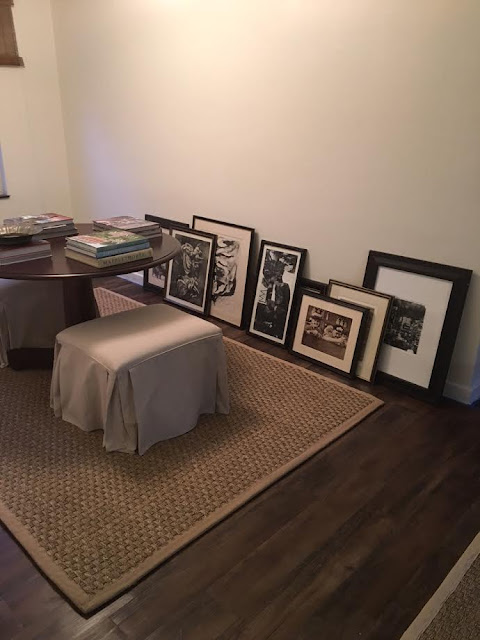 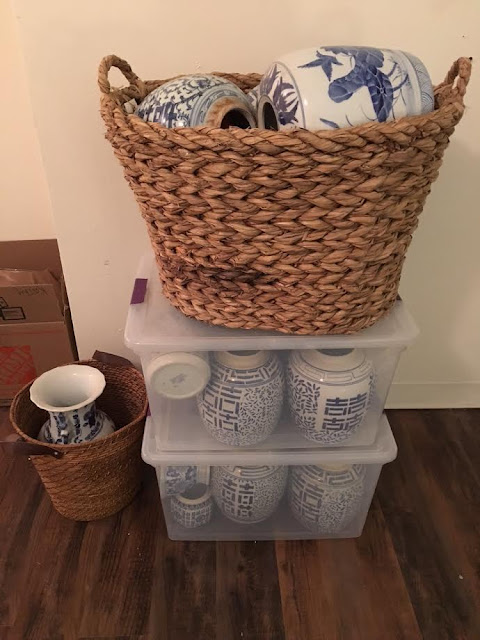 A photo from packing up at the old place. Who knew I had accumulated so much blue and white. This was only half of it! The other half had already been taken down to the new place. Sheeeesh! How do you spell hoarder? Artie? Yes! Ok. Got it, moving on! 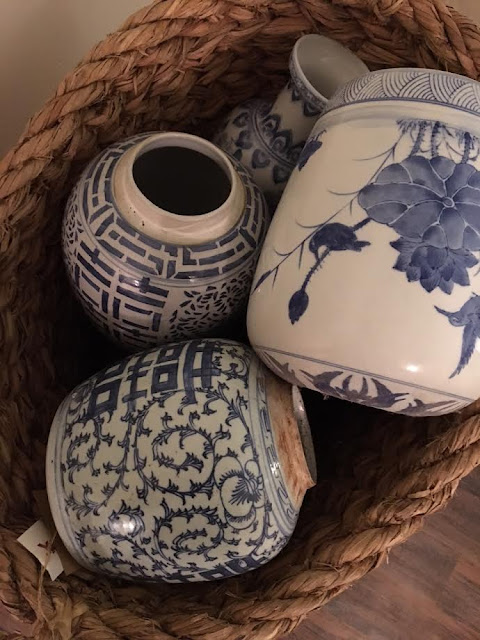 Side note: like how I packed it? Clearly I excel at moving. 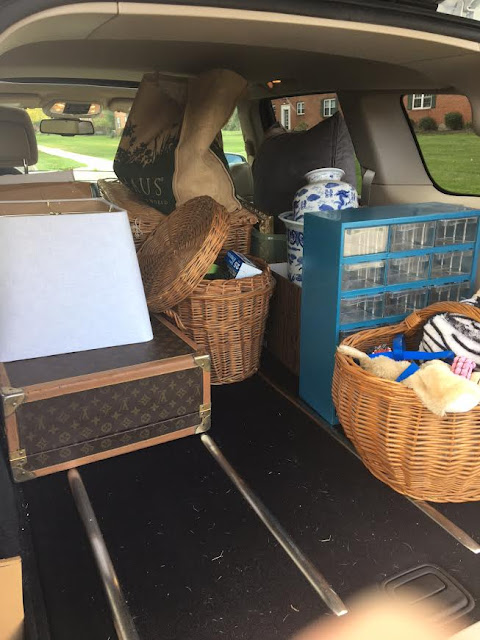 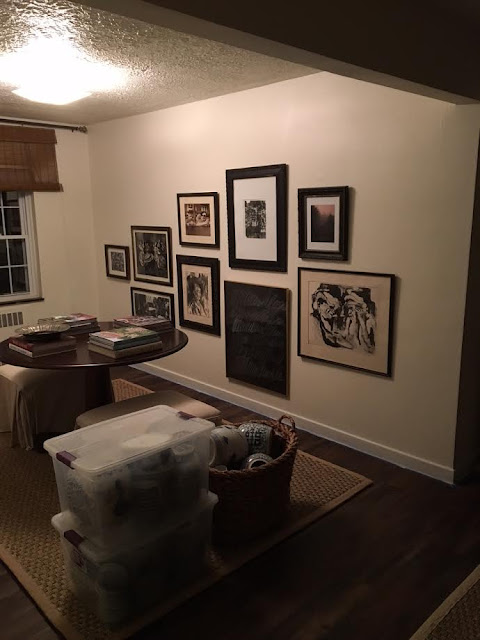 This photo was probably taken at about 3am, the gallery wall all hung and a partial hoard of the blue and white porcelain still “packed”. No Chinese ginger jars were harmed in the process of this move. I still need to hang a new light fixture. I’m mostly undecided about what to go there. I figure once I get the floors finished and all of the stuff moved over from the old place and sorted, I will tackle that project. 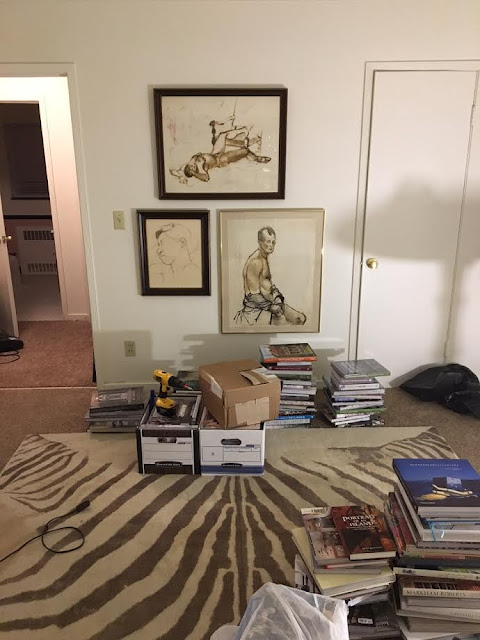 The bedroom is filled with design books. You may remember that my bookcases are going in here. I actually really like the bookcase in there. I’m a nighttime reader. I’ve always had a stack of books by the bed, making notes, etc.. Having all of them in the bedroom just made a lot of sense to me, and happened to be one of the only places that I had for them in the new space. A win-win, I guess. Stay tuned for how that’s working out! 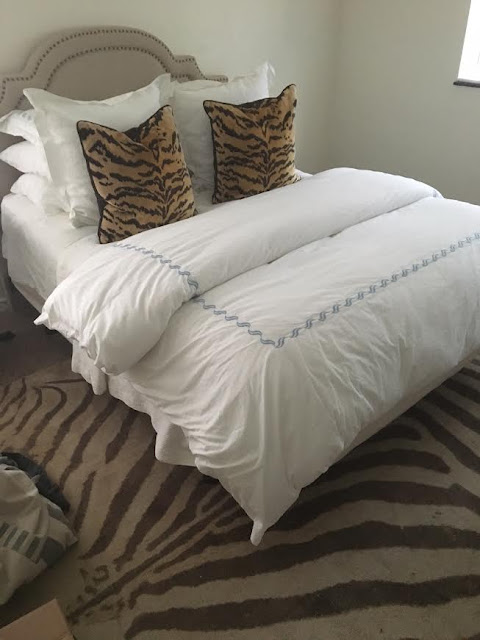 I spent about 7-hours at the laundromat, laundering bedding. It’s a nightmare when you’ve got to wash all this pretty stuff. Progress is lacking in here, but I will get it up and running soon. The bedskirt didn’t make the move. What do they use as the deck for these things? Tissue Paper? 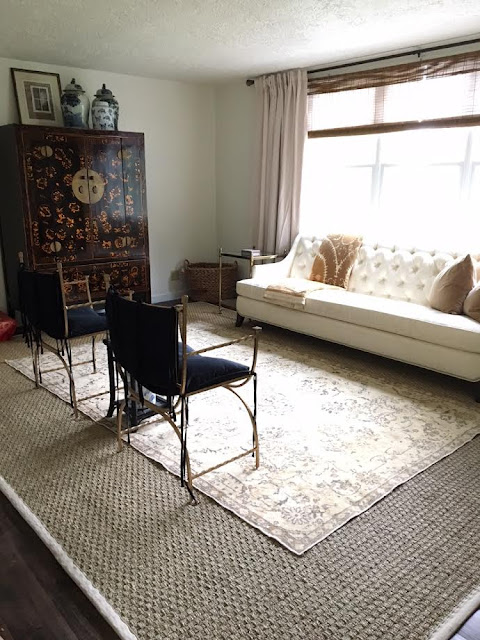 And the living room. Now, I teased you all with the last post with a bunch of tufted stuff. Here’s where I was going with that! Story to follow. I actually have to get that cushion to the upholsterer, so I can get a velvet cushion made in a camel/caramel/tobacco color. I ordered a leather chair on Saturday for the living room, and am working on picking out a new coffee table now.

UPDATE: I ordered the coffee table! I’m upside down in love with it, which means I’ll likely hate in and it will be on craigslist in 10-days. 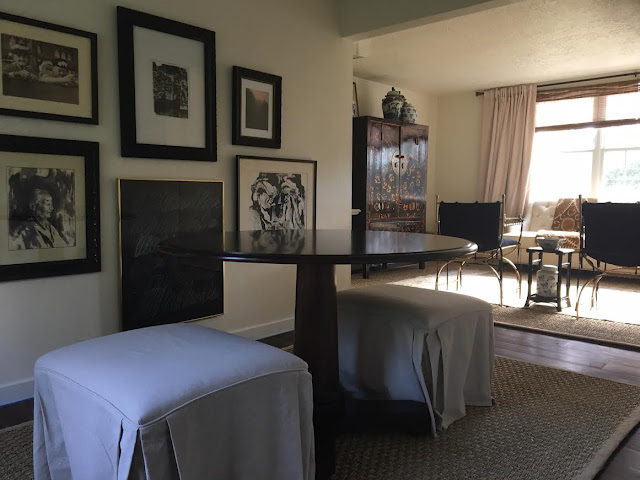 Alright, so this is part of the update. Literally, the way the living room and dining room look in real time, during my quick lunch break to walk Arlo and Louna around the block! The ottomans that I designed slipcovers for are in the dining room (I’m not sure I like this as a permanent solution, but for now, it’s how it goes!) 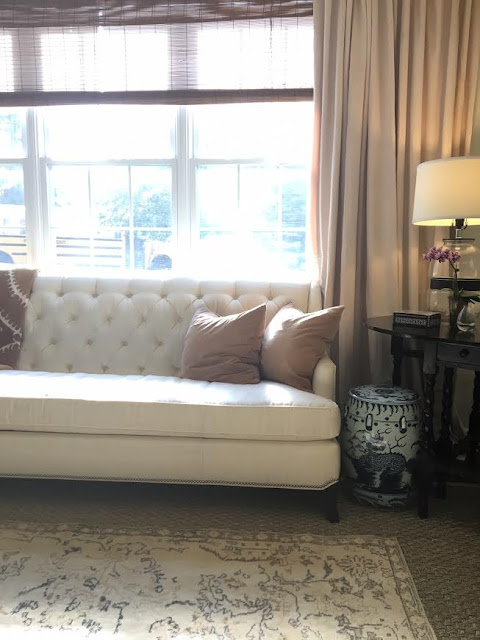 A somewhat better (at least closer) picture of the sofa. To the right of the sofa, I have a spindle gate leg table and Chinoiserie garden seat. I’m trying one other set of curtains later to see if I like them better than these. So many not quite whites in the room, and I’m not sure if I like them yet. 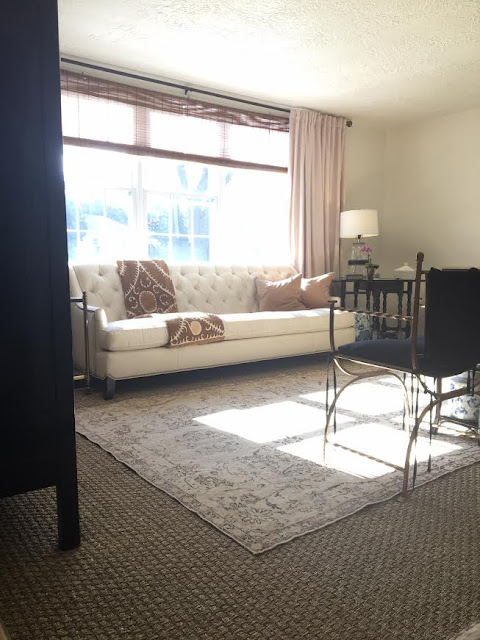 Looking into the living room from the bedroom wing. Ha! You like that!? The bedroom wing. SheesH! This room gets incredible light. This angle makes me giddy about that new table. I’m gonna keep that one a secret til’ it gets here. 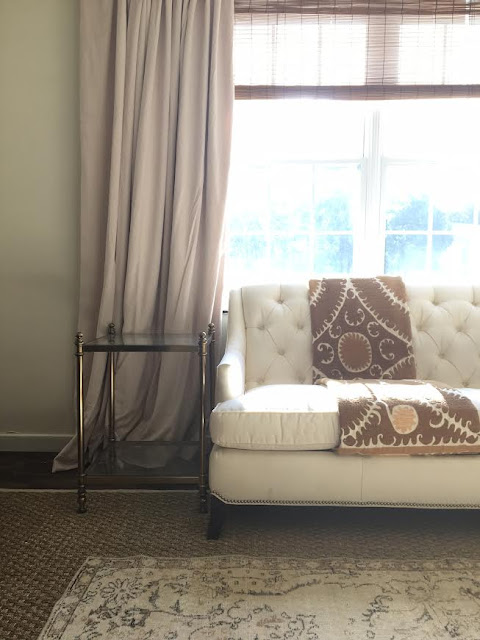 More of that sofa. This little French brass table will eventually part, in favor of something a bit lower, and more modern. I’ll get a antique brass pharmacy lamp to help with the necessary light. 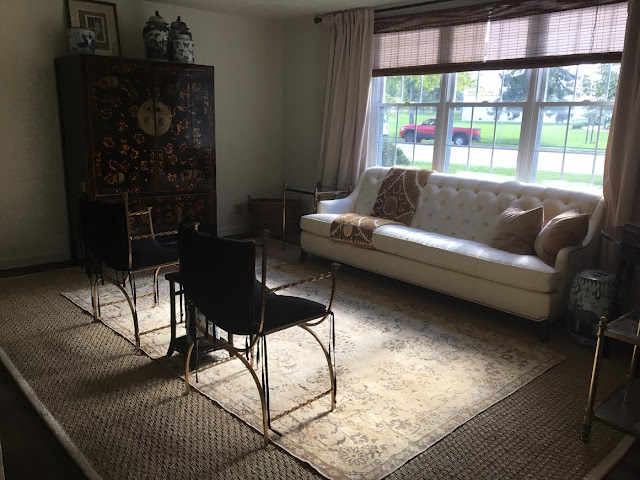 Sorry for the lighting – again I’m quickly snapping pics from my phone. I’ll get some better ones when I’m all finished with the set up. I have a call into the wholesale florist to see if they can order a fiddle fig for me. It’ll go in that corner where the basket is. The fig will actually be planted IN the basket, but not that basket.

If I gave you my to-do list, it’d make you dizzy! I’m not clear how I got so turned around and behind on this project, other than the fact that I simply have WAY too much going on in my life. Moving was probably not a good idea as far as practicality goes, but it’s too late now!

Before I leave you, here’s a few notes to those of you who have asked:

I’m working on a post about what and who inspired this space coming up in the next couple of days. There’ll be gorgeous photos of rooms that I love. Make sure to check back in for that, and then hopefully next Monday I will have some updated pictures of the apartment looking much better and more finished that it looks now!